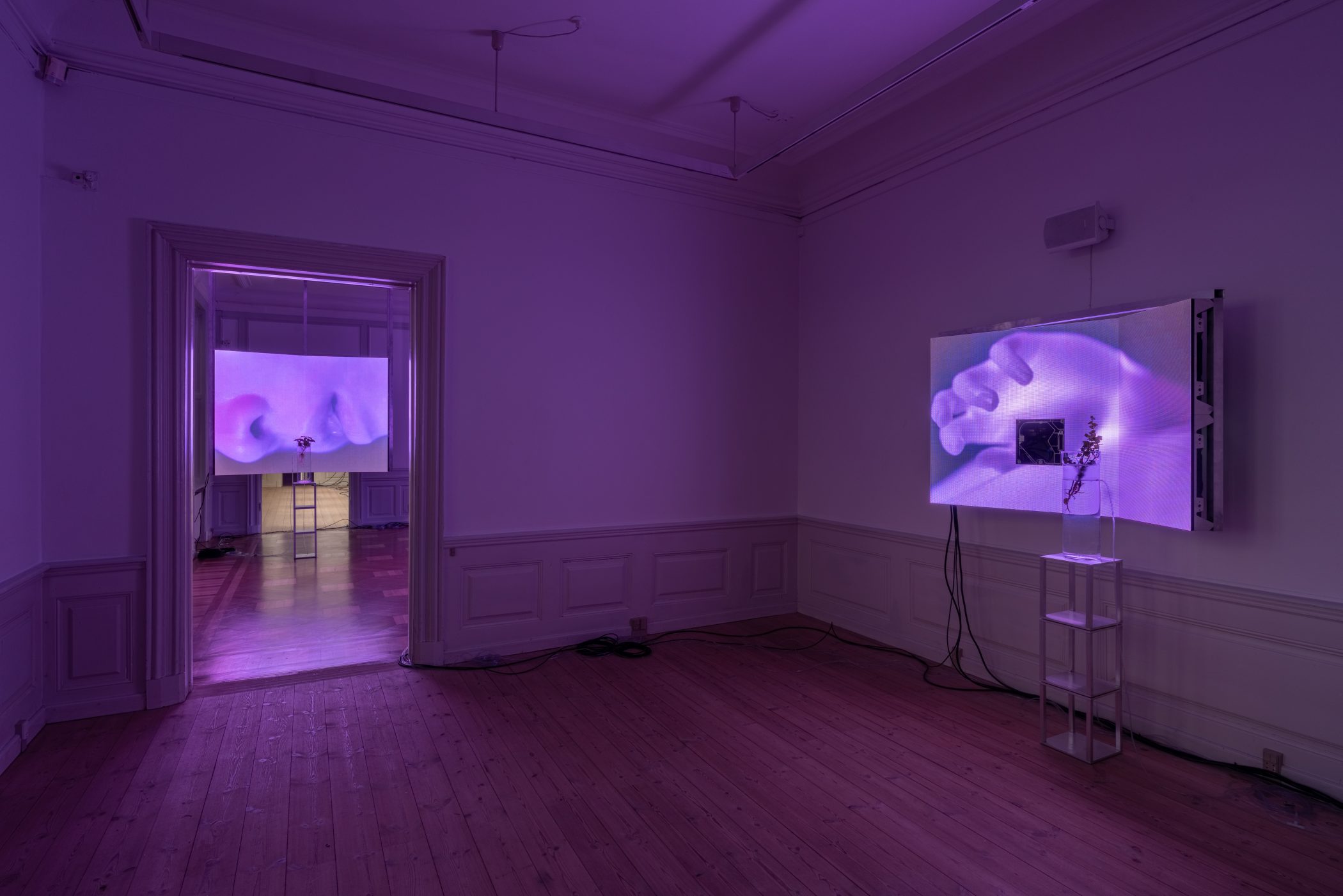 Jesper Just’s Seminarium, 2021, situated its visitors in the uncertain time and space of a futuristic high-tech plant laboratory. Networks of plastic wires and tubes ran throughout the installation, connecting LED screens spread across floors, mounted on walls, and suspended from ceilings, each panel bathing the space in a cool purple hue. As if hacked and rebuilt, these disjointed screens exposed the technological skeletons of the cables and hard drives that powered them.

Formally, the work echoed Just’s 2018 Circuits (Interpassivities), concurrently on view at the Statens Museum for Kunst in Copenhagen, which features ballet dancers whose movements are triggered by signals from electrodes attached to their bodies that are in turn are responding to live music. But Seminarium added another layer to the complexity: This time, Just brought a nonhuman organic protagonist—plant life—into the circuit of exchange. Plants such as golden nettles and geraniums were submerged in water inside glass cylinders and placed on custom-designed shelves at various heights in close proximity to the LED panels. Transparent plastic tubes formed part of a hydroponic cultivation system supplying the flora with nutrition. On the screens, meticulously shot footage of cropped intertwined bodies moved slightly. “Experience emotional wellness with clinically proven biofeedback technology,” intoned a female voice, as if intending to elicit positive product expectations. Each confined to its own loop, the translucent on-screen bodies, too, appeared detached—consistent with Just’s long-standing predilection for disjunctive narrative—but over time revealed their purpose as light sources allowing the plants to perform photosynthesis. In this controlled environment, the intricate elegant web of roots formed a poetic contrast to the muscular contours of the human body and the cluster of exposed wires plugged into the back of each pixelating screen. Bodies, machines, and plants became part of the same haptic circuit, sending and receiving electrical signals and communicating sensorial stimuli.

The site-specific installation also strategically allowed intermittent views of the carefully maintained Baroque gardens that surround the former manor house that is now Gl Holtegaard. The controlled indoor environment echoed the gardens’ symmetrical and ordered design, both seemingly pointing to the hubris of believing that humans are the be-all and end-all of natural history. Seeing how each plant leaned toward the purple-lit bodies on-screen—the artificial feedback loop that sustains them—and noticing that their roots continued to feed and grow, I was reminded that roots are what allow plants to connect and even communicate with what is now understood to be a sophisticated underground fungal network crucial for the maintenance of the soil that also sustains other forms of life. In the world outside, plants will, as scientists have pointed out, adapt, diversify, and proliferate, especially if left without competition in the face of the mass extinction of animal species, including humans. As the title Seminarium (Latin for “plant nursery”) suggests, we have much to learn from the study of plants, not least the way they rely on other species to grow and survive.