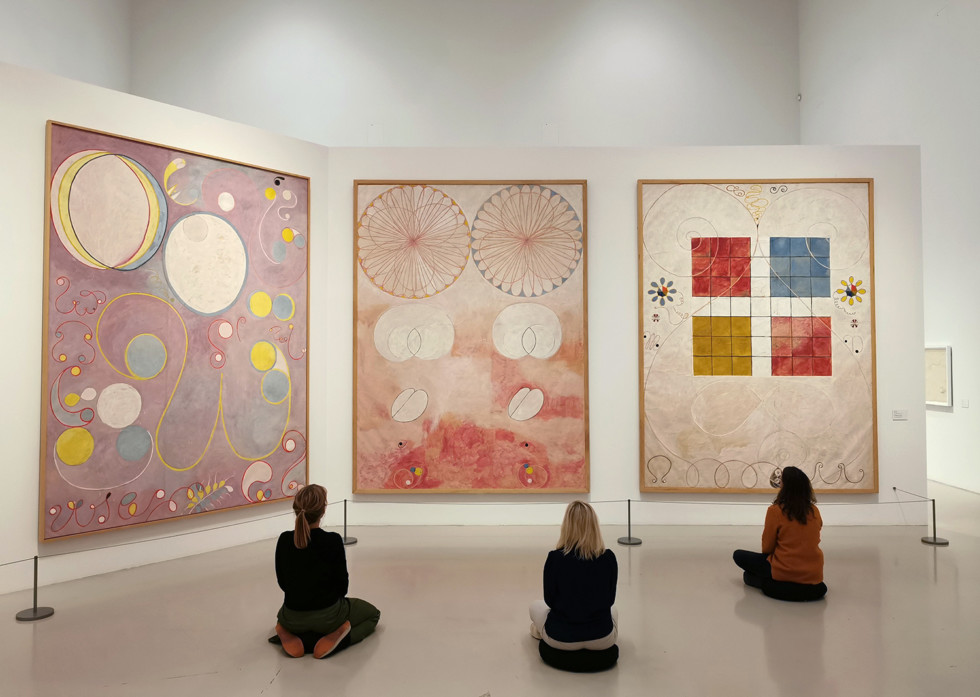 Hilma af Klint (1862–1944) was a pioneer of abstraction. As early as 1906 she had developed a rich, symbolic imagery that preceded the more broadly recognized emergence of abstract art. Since her retrospective at Moderna Museet in Stockholm in 2013, interest in the Swedish artist has increased all over the world. The exhibition “Hilma af Klint – Artist, Researcher, Medium” further expands our understanding of this groundbreaking artist and researcher.

Hilma af Klint studied at the Royal Academy of Fine Arts in Stockholm from 1882 to 1887 where she focused on naturalistic landscape and portrait paintings. Like many of her contemporaries, af Klint also had a keen interest in invisible dimensions that exist beyond the visible world. When painting she was convinced that she was in contact with higher consciousness, which conveyed messages through her. Her major series, “The Paintings for the Temple”, became the crux of this artistic inquiry.

The exhibition centres on three aspects of Hilma af Klint’s life and interests – as artist, researcher and medium – that are key to revealing and understanding her art. With few exceptions, af Klint never exhibited her abstract works during her lifetime. Yet she left us with a radical body of work – unprecedented in its use of color, scale and composition – which she hoped future audiences might be better able to sense and decode.

Hilma af Klint made paintings for the future, and that future is now.

Like many of her contemporaries at the turn of the twentieth century, Hilma af Klint sought to expand her consciousness in order to gain a wider perspective on what we perceive as reality. Consciousness remains one of the deepest mysteries in our time, a subject eagerly explored in neurology, psychology, quantum physics and epigenetics. As part of her spiritual practice, af Klint meditated, adhered to a vegetarian diet, and studied Theosophy and Rosicrucianism. These two esoteric schools thought knowledge of a deeper spiritual reality could be achieved through focused attention on intuition, meditation, and other means of transcending normal human consciousness. Over a period of ten years, af Klint met weekly with four other women, known as De fem (“The Five”). They trained their capability to access or “channel” higher levels of consciousness through contact with spiritual guides known as De Höga(“The Masters”). Af Klint received a specific assignment, which she accepted, known as “The Paintings for the Temple”. She worked throughout her life to understand the deeper meaning embedded in these works.

The pictures were painted directly through me, without any preliminary drawings and with great force. I had no idea what the paintings were supposed to depict; nevertheless, I worked swiftly and surely, without changing a single brushstroke

The artist described how she painted the series as a medium, where shapes, colors and compositions came to her. Although af Klint perceived these works as flowing uninhibitedly through her guided hand, she very much applied herself and all her skills in the process: she worked methodically and sequentially in series, divided into thematically and formally focused groups exploring different aspects of cosmic and human evolution.

The Paintings for the Temple

The overall theme of the series is to convey different aspects of human evolution, instigated by polarity. ”The Paintings for the Temple” also thematizes different stages of development that every human being goes through during life on earth. The temple in the title refers not only to a physical building, which af Klint imagined would house the work, but also to the body as a temple for the soul.