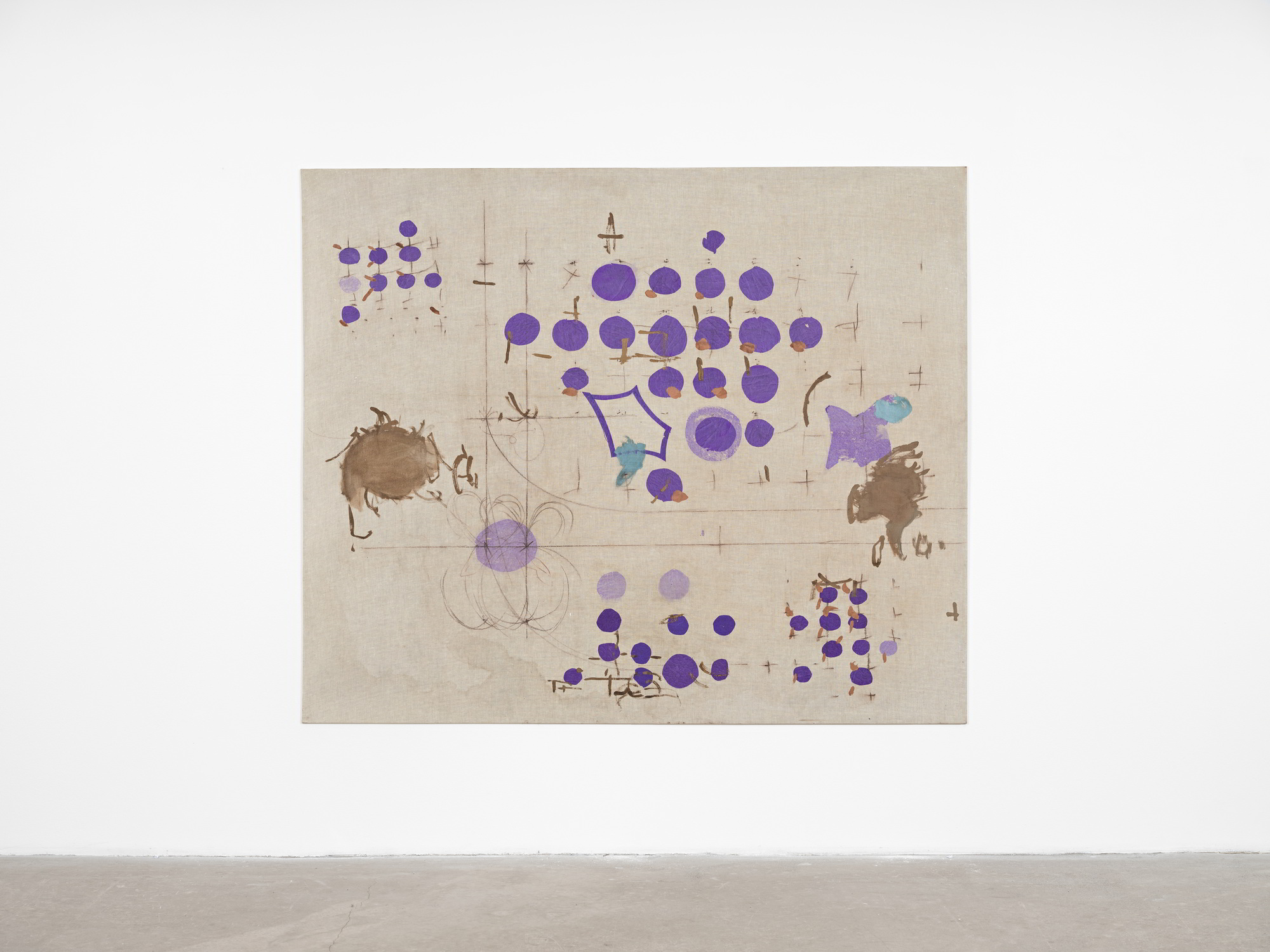 Religion, magic, art, physics, and mathematics blend in Goutam Ghosh’s solo exhibition “Morph, blend and flatten (space) of Bird, Reptiles and Flower.” The delicate, sometimes dreamlike paintings gain energy from the friction between ideas from different disciplines and systems of thought as they come into contact. Ghosh draws on conversations with Indian scholar Kaustubh Das about tantra and its understanding of consciousness as a source for both his thinking and making. “Tantra,” Sanskrit for loom, weaves together complex concepts and practices. In the tradition of sacred art, tantra drawings and paintings of abstract geometric shapes were used as meditative tools to awaken heightened states of embodied consciousness. Tantra is of interest to Ghosh because it is a phenomenological tradition that validates knowledge resulting from direct experience which would be difficult to empirically account for, like the movement of energy or time. Yet, his paintings also show an awareness of the human process of cognition and its reliance on quantifiable data or pattern. The mind wants to recognize and categorize, to find a pattern.

Paintings like Untitled (all works 2018), Glycerin, and Tennis Ball exhibit a subjective pattern, while they bring up references to systems of order and logic. All three paintings have a grid structure, through which objects move like musical notations. In Untitled, earth-toned flowers and colorful brushstrokes appear in circular motion, while Tennis Ball suggests some sort of schematic organization of evolving organic material in an uncertain relationship to the large blue circle from which the work derives its title. As is the case with many of Ghosh’s paintings, the painted objects seem bound or conjured by a logic viewers are not expected to decipher. A work like Trick in the tent, made up of white and red circular abstract scribbles on a black board, yields its dynamic composition exactly from this feeling that the formula is present but inaccessible. In another painting, Violet, Ghosh leaves a large purple field of color untouched, as an open suggestion of space for other possible scenarios for objects—in this case, parrots and an apple—and paint to come together. A table display running the length of one wall of the gallery includes small assemblages and the artist’s sketchbooks filled with drawings and personal notes on materials like mercury. Together they exemplify Ghosh’s interest in object ontology, and how objects might collapse or transform their state.

Mercury, and its material properties, is also the inspiration for the title of the film PAARA, made in collaboration with Oslo-based artist Jason Havneraas, here presented as a double projection behind a plywood partition. According to the artist, the title plays both on the Hindi word for mercury, paraa, as well as two confluent Sanskrit catergories “Para Vidya,” transcendental knowledge “and “Apara Vidya,” material knowledge.

The film’s narration explores the memories of a 90-year-old magician. “It was a grand day for a grand narrative. A space necessarily opened up with 360 degrees of possibility,” chants the narrator, as performers wearing colorful, pointed hats and geometric Dada-like costumes position themselves in various constellations along white stage markings, outlined on the ground. They hold and move various props, but the relationship between the bodies and performed rituals is elusive; the rules of the game remain unknown to us. In the gap between the narrator’s words and the performed magic rituals, objects both exist in time and carry it forward, always between a moment of stasis and of becoming something else. Just as the magician in the film recollects how he moved a rope to make people believe they were seeing a snake, so objects in Ghosh’s universe freeze momentarily into a specific state to become a part of a composition.

As a whole, the exhibition keeps returning us to the idea of the pattern as a structure that enables both mind and objects to wander between academic disciplines and spark new states of being. In Ghosh’s practice, the pattern allows for opposing knowledge systems to co-exist, while he carves a space both in making and meaning for subjective experience of that which lies beyond the limits of the frame.